Structure and Use of Automatic Spray Guns 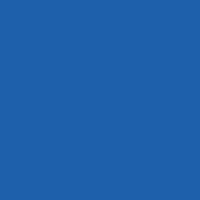 Spray guns are painting equipment that mix a fluid and compressed air to atomize the fluid. They are typically associated with handheld spray guns used for painting automobile bodies and DIY crafts, but there are also other types used at production sites. Those are fixed “automatic spray guns.” This column will explain the fundamentals of automatic spray guns for first-timer users who are considering using one.

What is an automatic spray gun? What is it used for?

An automatic spray gun is a painting device used at production sites such as factories. Unlike handheld spray guns, its position is fixed in the production line and sprays fluid by automatic control.

Automatic spray guns have a variety of applications. They are used not only for painting and coating, but also for applying all kinds of fluids such as metalworking oils, rust prevention oils, mold-release agents, fluxes, adhesives, cooking oils, syrups, and chemicals. Their basic function is to break up fluids into fine particles by blasting them with compressed air and spreading them thinly and evenly.

Some users of automatic spray guns are looking for a completely new way of coating, while others seek to switch from other coating methods such as hand brushing, rollers, dripping, and single-fluid nozzles.

With an automatic spray gun, however, the needle valve is retracted by the pressure of the compressed air instead of being retracted manually. When high-pressure air at around 0.3 MPa is applied to the on/off air (piston-actuated air) inlet, it pushes the piston (integrated with the needle valve) to open the fluid path. This mixes the fluid with the compressed air and sprays it. When the on/off air is stopped, the force of the spring pushes the piston back and closes the fluid path again.

How do you adjust the spray?

As mentioned in the previous paragraph, compressed air has two roles. The compressed air opens and closes the valve. Its other role is to act as the kinetic energy to atomize the fluid. The spray can be adjusted by increasing or decreasing the pressure of this air (atomizing air).

When the atomizing air pressure is increased (about 0.1–0.2 MPa), the size of the droplets becomes smaller, which results in a smooth and beautiful coated surface. However, many of the finely atomized particles disperse without landing on the surface, which increases the amount of fluid used.

Most Lumina models can be divided into two types: those with a single air inlet (such as the ST-5, HM-1, and HM-3) and those with two air inlets (such as the ST-6, HM-6, and PR-40). As already explained, compressed air has two purposes: on/off and atomization. The two air inlet types have an air path for each of these purposes. For simplicity, the single air inlet type requires only one air path.

Lumina also offers models with three air inlets (such as the ST-6W and MK-3). In addition to controlling on/off and atomization, they have an air inlet for the spray pattern.

Spray pattern is a term that refers to the shape of a spray. Spray patterns are primarily round or flat-fan (elliptical), and flat-fan sprays are made by squeezing a round spray with air pressure. With two air inlet types, the air for the pattern is also used for the atomizing air, but three inlet types have a dedicated inlet for the pattern. This allows the width of a flat-fan spray (pattern width) to be finely tuned.

Difference between single-fluid and two-fluid nozzles

Incidentally, you may have seen atomized water being sprayed for cooling purposes at an outdoor facility in the summer. The spray nozzles used in these places are called “single-fluid nozzles” and are atomized only by the pressure of the fluid instead of using air. This kind of nozzle is often used for cleaning tanks and cooking vats in food factories. The automatic spray gun introduced in this column is a “two-fluid nozzle” that mixes two fluids, a fluid and compressed air.

Single-fluid nozzles are attractive for their simplicity in not requiring compressed air. They are very easy to install, particularly for spraying water for humidification or cooling purposes, as they do not need a fluid pump if they are connected directly to a water faucet. In addition, single-fluid nozzles are suited for cleaning since their high pressure can be used to remove dirt. On the other hand, since a high pressure is applied to the fluid, the flow rate of the discharge is relatively large and the size of the droplets is also large. Therefore, they are not suitable for applying small amounts of fluid, painting, or coating. Also, because they do not have a built-in valve, the spray does not stop instantly, and any fluid remaining in the fluid path will continue to flow for a while. These two types of nozzles are used at production sites depending on the application.

Finally, I will explain how to connect two automatic spray guns. Please refer to “Required items” in the Operations Guide for the necessary items for their use. The spray guns are ST-6s with two air inlets. There are three ways to supply fluid: a pressure feed tank, gravity feed container, and pump, but this example will use a pressure feed tank. The diagram below is an example of a basic connection. 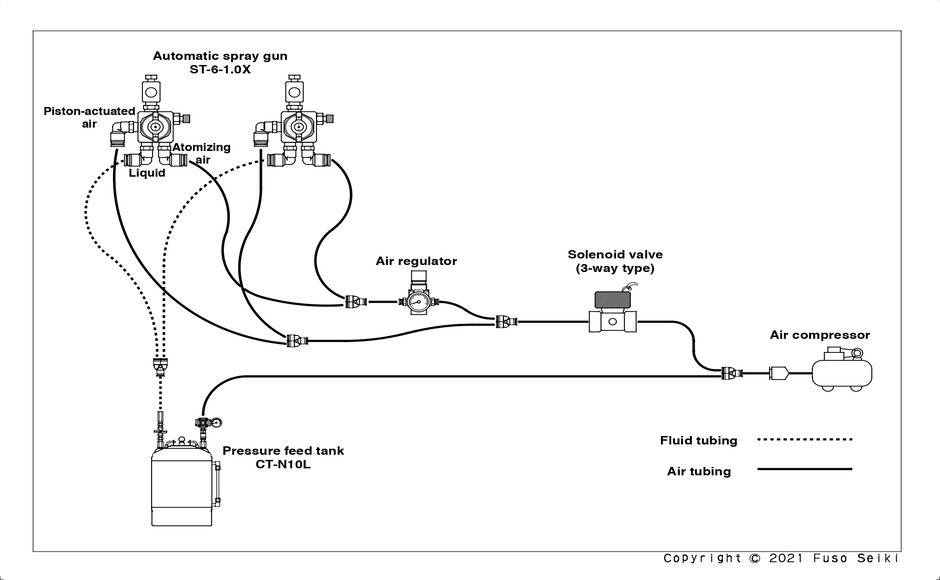 The air from the compressor is split, with one feed to the spray guns and the other to the pressure feed tank. No valve is required in the air path of the tank as the fluid is constantly under pressure and supplied to the spray gun.

Air is injected into the spray guns only when they are on. A solenoid valve is used to control this timing. There are solenoid valves with two to five ports depending on the number of air paths. Use a 3-way solenoid valve with an exhaust port to control the automatic spray gun. In particular, when using a 2-port valve that does not have an exhaust port, the residual pressure inside the spray gun will not be released even when the air is stopped, so the needle valve will remain open and the fluid will continue to flow.

In the above connection diagram, the tubes branch from the end of the solenoid valve and has an air regulator on only one side. This is to adjust the spray by increasing or decreasing the pressure of the atomizing air. The on/off air (piston-actuated air) can use the pressure at the source, so no regulator is used.

Do you now have a basic understanding of automatic spray guns? This column explained the differences between automatic and hand held spray guns, and between single-fluid nozzles, but spray guns are further subdivided by their spray method. See the column An Easy-to-Understand Guide to Types of Paint Sprayers to learn more.